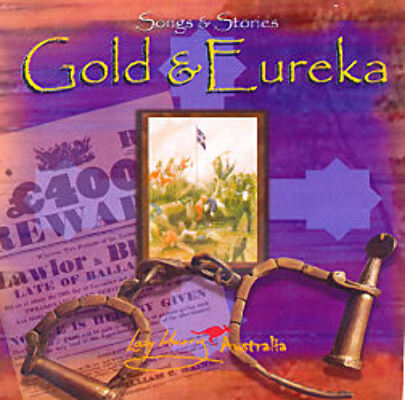 On Saturday 2nd December 1854 nearly one thousand miners gathered in the stockade they had built at the Eureka diggings at Ballarat.  They had chosen Peter Lalor to be their leader and their womenfolk had sewn a beautiful flag of blue and white.  The miners took a solemn oath of allegiance to this flag saying "We swear by the Southern Cross to stand truly by each other and defend our rights and liberties".

Back in October a digger named Scobie had been kicked to death near the Eureka Hotel.  Bentley the publican was charged with murder but he was friendly with the police and the charges were dropped.  As a result the Eureka Hotel was burnt to the ground and the government sent extra soldiers from Melbourne.  Three men were arrested and frequent licence inspections were ordered.  By the end of that hot November tensions were at breaking point.

At 4am on Sunday morning December 3, 1854, most of the miners had left the stockade and only 155 stayed there with Peter Lalor thinking that there would be no trouble on the Sabbath Day. Captain Thomas, with a well armed force of 300 soldiers, cavalry and police quickly overwhelmed the stockade.  Thirty miners were killed by gunfire or died at the point of the bayonet.  One hundred and twenty five were taken prisoner.  Peter Lalor was badly wounded and left for dead but his sympathizers helped him to escape.  He had lost his arm in the rebellion but was soon to become a respected member of the new parliament.  The miners had lost the battle but won the fight.  No jury would convict them. Gold Licences were abolished and many police were sacked.  The Eureka Stockade may well be regarded as the birthplace of Australian democracy.

This new Lazy Harry CD brilliantly captures the drama of the Gold and the Eureka Stockade in narrative and in song.  It provides a concise history of the period and conveys the social, economic and political impact caused by such overwhelming events.