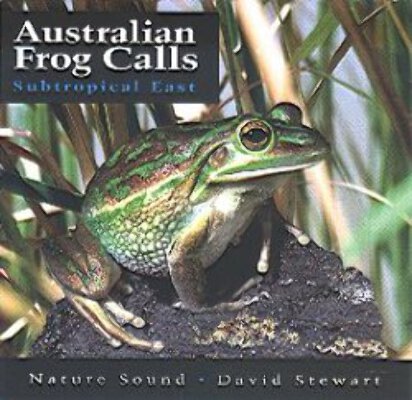 The 74 frog calls recorded on this compact disc cover nearly all the species in subtropical eastern Australia.  The region is bounded by Rockhampton (Tropic of Capricorn) to the north, Nowra (Shoalhaven River) to the south and includes the Great Dividing Range.  Calls of 70 species are included, and whenever a species has two races with distinctly different calls, both are provided.  The only species omitted are those whose calls have never been recorded - Southern Day Frog (Taudactylus diurnis) and Peppered Tree Frog (Litoria piperata).

You are not going to find all of these frogs easily.  Often you will find a number of species in one habitat, but there are of course a range of habitats.  Whilst most species breed in the warmer months, some are winter breeders.  The best time to go looking for frogs is at night, especially during or after rain.  If you get hooked on frogs, you will soon understand why some people think the weather is great when it is teeming with rain.

About the Author
David Stewart is Australia's most renowned wildlife recordist. Based on the far north coast of New South Wales, David has spent the last 20 years travelling throughout Australia amassing the most extensive collection of natural bird, frog and mammal sound in the country. His recordings are noted for their clarity, fullness of range and faultless identification of the subject. David's digital collection is fully documented and has been lodged with the Australian National Wildlife Collection, CSIRO in Canberra as his contribution to Australia's national heritage. The British Library, National Sound Archive also houses the collection. David has also assisted the NSW National Parks & Wildlife Service by compiling seven field survey cassettes/CDs of rare fauna in NSW. This is David's sixth commercial CD and includes some of the best ever recordings of the animal sounds of the Australian bush as well as other amazing natural sounds.