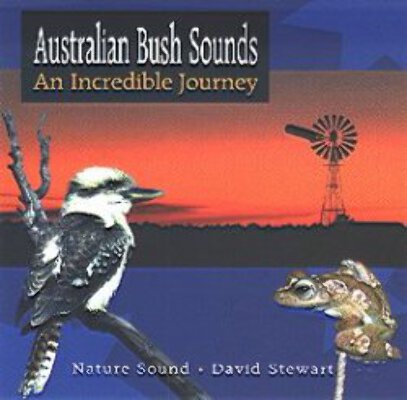 Experience amazing bush sounds as you are taken on a journey around Australia.  From the desert to the rainforest, the mallee to the mangroves, the mountains to the sea, this CD captures the timeless ambience of Australia.  Hear the wonderful songs of birds in remote places, listen to the choruses of frogs in wetland habitats and marvel at the incredible calls of possums, dingoes and goannas.  Tropical thunderstorms, the bubbling Artesian Basin bores, campfires and crashing waves interweave with the rustic nostalgia of windmills and steam trains in this amazing soundscape. This selectionof 52 separate recordings blended together as a continuous sequence provides an astonishing compostion of the author's experiences with sound recording in the Australian bush.

The album features no music or spoken commentary.  The natural calls of animals and other bush sounds featured can be appreciated as one long journey which you can imagine while travelling around Australia.  Information about the sound source can be found inside the cover.  For those interested to know where the recordings were made, the album is indexed.

Birds Australia, the largest bird organisation in the country, endorses and recommends this album to people intersted in hearing an amazing collection of different sounds of the Australian bush.

About the Author
David Stewart is Australia's most renowned wildlife recordist. Based on the far north coast of New South Wales, David has spent the last 20 years travelling throughout Australia amassing the most extensive collection of natural bird, frog and mammal sound in the country. His recordings are noted for their clarity, fullness of range and faultless identification of the subject. David's digital collection is fully documented and has been lodged with the Australian National Wildlife Collection, CSIRO in Canberra as his contribution to Australia's national heritage. The British Library, National Sound Archive also houses the collection. David has also assisted the NSW National Parks & Wildlife Service by compiling seven field survey cassettes/CDs of rare fauna in NSW. This is David's sixth commercial CD and includes some of the best ever recordings of the animal sounds of the Australian bush as well as other amazing natural sounds.